The Degen 1103 modified for DRM 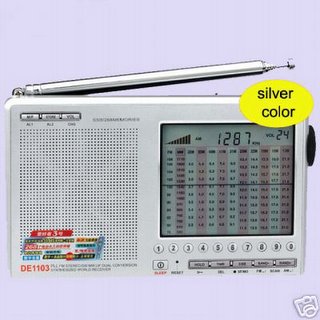 Continuing the experiments on the small but enthusiastic (and inexpensive) Degen DE1103 purchased on eBay. Daniele Giusti, Lodi's list FMDXItaly linked a portable media card to convert the Intermediate frequency from 455 kHz to 12 kHz. The card is produced by Crispino Messina, I5XWW , The output thus obtained can be brought to the computer's sound card (via the in-line or microphone) and demodulated with a proper application. In case we used Dream . Dream allows you to decode DRM broadcasts. 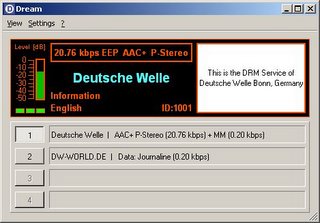 But not only DRM, it can be used to demodulate the signals received in Am, USB, LSB and CW
using a variable filter as you like and then get a much better reception than the receiver used in the traditional way. 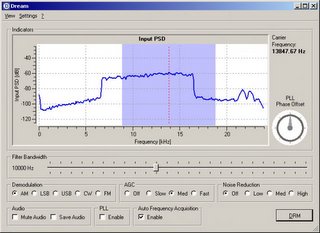 Of course to make the demodulation you can use other programs, which are available mostly free downloadable from the Internet. Just noticed something wrong with the fact that the Degen is not shielded. The connection cable (preferably made with coaxial cable) between the degenerate and the conversion board 455/12 should move as far away as possible from the attack by the ferrite antenna and stylus. All information, with the pictures of the modification, can be found on the site FMDX Italy .

More information about changes to portable receivers for DRM can be found on the German site (in German) www.funkerberg.de , segnalatomi by Andrea Borgnino, whose website is certainly visited.

Originally written by fmdxITALY, all rights goes to them. We are giving a English version for your help.

This argument is a bit 'off topic, but since the group moving more than 70 Degen 1103 here are some notes on the evidence of change (by attaching a small card) to receive the DRM.
Daniele Giusti has installed a card that makes a conversion from 450 kHz to 12 kHz. The card works fine, unfortunately there is little space in the receiver and interface interference, but the results are exciting. Anyway here's how he made the change Daniele. 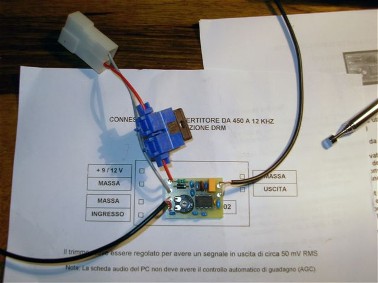 Here, illustrated by some pictures, how to proceed:
after the connections tab 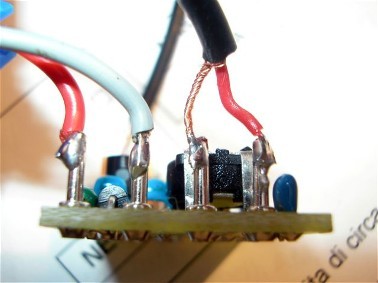 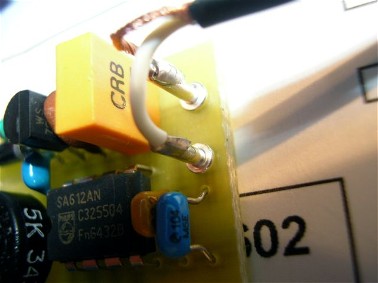 In this case, the point at which the signal is a "jumper" located near the ferrite antenna (this "closeness" Unfortunately, because of interference compromising the final results). In the picture we see him first with the radio reception, 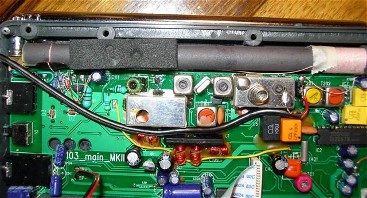 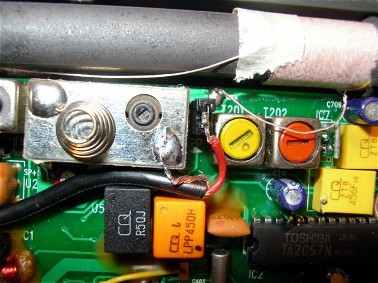 Finally, even with the cable soldered. The jumper can also be extracted to make peace with the welding


Then the mass is also connected 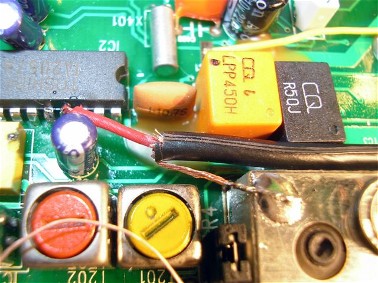 .
To release the cable from the receiver does not need to drill holes in the chassis: you can get him out of the hole for short rope canvas that serves to challenge the receiver. 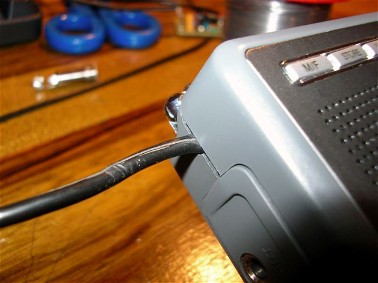 The radio signal is taken from the card that converts it from 450 to 12 kHz. With another cable sends the signal to 132 kHz audio input of the PC.

On the computer, through the DREAM program (supplied on CD with the card), proceeds to decode the digital signal

Here are the views of Dream, which displays the stations received from Daniel.

Here are the first experiences of Daniel:
Unfortunately, there is a small problem in the audio converted and sent to the headset, there is always a "noise" background, that along with the music or the decoded speech, you also feel the 12 kHz signal that "passes" through the circuit of the computer.
I also heard perfectly only 3995 kHz radio Deutsche Welle, while the other three issuers have decoded so bad you can only photograph the logo, almost without having to understand audio.
This means that this ticket requires an input digital signal very strong and clean, is also often necessary to act on the trimmer that controls the width of the input signal (the receiver's volume to 0 and then go left or acts mechanically on the trimmer, or on the level of the audio mixer of Windows) to avoid distortion or loss of "packets".
In the coming days I will try again to receive the DRM, trying to clean up the audio from the digital noise in the background.
Still on the subject of the photos, please do not post them because I took the exclusive list FMDX, so that if someone would Fabrizio decided to publish the exclusive (I know, is a detail, but somehow we have to reward F. work for us!).

In case any of you interested in more information or to buy the converter card (which costs a few €), you may contact e.mail address Fabrizio staff.

Crispino Messina, designer of the card, sent some notes to reduce noise. In fact the main problem is the shielding of the receiver (because it's cheap) and the ferrite antenna connection near by.
To pick up less noise, the connection to the converter must be as short as possible, made with two loose wires or even a small piece of coaxial cable, which is central to the hot side withdrawal from the radio and goes to the sock mass nearby, inside the radio, where the signal is taken to indicate I do not know what these points because I never added the converter to a radio or another Degen. so I just theoretical information considering that there are these problems, the drive will put the opposite side to where there is the antenna input on your receiver or even away from the antenna in radio's internal ferrite, because even if it does not work , it may pick up some 'unwanted radio frequency the radio will be operated initially with internal batteries. The converter will, at least initially, be operated with a 9 volt battery, which will be connected to appropriate pins on the card drive on the computer too, if laptop will run on its batteries if there is a switching power supply, will be the case to unplug from the network, in addition to not let him feed the computer a general rule: the links longer than is strictly necessary should be made with shielded cable, although they may pick the same disorder neon lamps, switching power supplies and other gadgets that pollute at the level of radio frequency output of the converter must be made with coaxial cable to the microphone input or line-in computer microphone input is mono and will generally use a mono input jack is stereo line-in and connections with the cable will be made: the mass of the shield of the cable jack stereo, central wire of the cable to both the tabs on the left and right channels of the same stereo jack on the trimmer drive is put in a central position or at least set in place medium-high (clockwise) then you must act on the commands of the Windows mixer to get an adequate signal level for the Dream program can be developed if the adjustments made are not sufficient you can try to change the input on your sound card (which take into account the mic input is more sensitive than the line-in and therefore requires less signal) in extreme cases you can also try to adjust the trimmer on its lowest values ​​(setting counterclockwise), but it is counterproductive: the ' input impedance change much, it becomes low and the circuits of the radio can be loaded too. So the radio does not go out enough signal to the drive and even other circuits of the radio no longer work correctly