An illusion of normality: Liz Skelton remembers Radio Prague after the invasion

[17-08-2008]
By David Vaughan
When Soviet tanks rolled into Prague in the night from August 20-21 1968, the Czechoslovak Radio building was one of the first places that they tried to bring under control. In the process the building was damaged, several
people were killed and dozens injured. Broadcasts went on in secret for several days, keeping the world informed of what was really happening, initially from within the building itself, and then from other locations in the city, using mobile studios and transmitters.

Liz Skelton
The story of how radio staff defied the invaders is well known, but what we
hear far less often is what happened at the radio in the weeks and months
that followed. The answer may come as a surprise. Almost within days,
things went back to normal. Once the Soviets had bullied the Czechoslovak
leadership into accepting the invasion, their next step was to create the
illusion that nothing very drastic had happened. At the radio this meant
that initially no-one was sacked or purged and people just went back to
their jobs. And it was just at this time, literally days after the
invasion, that a 24-year-old Englishwoman started working here at Radio
Prague. Her name was Liz Skelton, and a few weeks ago I had the opportunity
to record an interview with her as she revisited the building where she had
worked 40 years before. She began by telling me how she came to be in
Prague at such an extraordinary moment.
“Well, it was a little impulsive. I had a friend in England who was half
Czech and half English, and when the Russians invaded in August of 1968, he had to make a significant decision, which was whether to come back to live in Czechoslovakia, with the risk that he couldn’t leave again, or stay in
England. He decided to come back and I decided to come with him, not knowing how long I would end up staying. I thought I might be here for a few weeks. It was impulsive, but it turned out to be a very interesting time. I ended up staying for nearly two years.”
And this was in fact just after the Soviet invasion, so it was a time of  great uncertainty and concern here in Czechoslovakia. Nobody had the faintest idea what was going to happen…

Photo: Josef Koudelka
“No, they didn’t at all and nor did I, obviously, and I was very politically naïve. I was 24 years old in 1968 and really had very little knowledge of what could happen walking into a communist country at the time. We drove here and crossed the border about five days after the invasion, and there were tanks quite visible. We arrived in the dead of night and I wondered what on earth I had come to. It was very dark and bleak, and actually in the first couple of nights you could hear tankfire or gunfire, there were still some skirmishes going on until things settled down a bit.
“In the following months there were a lot of demonstrations, there were some very interesting pictures that I actually smuggled out of the country for a fellow called Josef Koudelka, who is very famous now, I gather. He took photos of the crowds climbing up on tanks and, I guess, yelling at these young Soviet soldiers, who were rather offended, because they thought they had come in to save everybody and in fact they had got a very, very unfriendly reception.”
And how about the radio? You started working at Radio Prague. How did that
come about? It was a time when the Soviets wanted to clamp down on Radio
Prague and there had even been fighting outside this building. 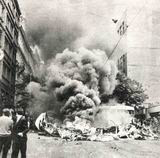 August 1968 outside the Czech Radio building
“That’s true. Let me tell you first how I came to work here. Pavel,
who was my boyfriend at the time, had worked in the English section of
Radio Prague before he had gone to England for six months, so when he came
back, he wanted to continue to work part time at the radio. He was actually
studying, doing a degree at Charles University, but as a part time employee
he had worked at the radio. When we came up to see his former colleagues, I
was asked if I had ever had any broadcasting experience, because they
needed another voice in the English section. I said I certainly hadn’t
had any broadcasting experience, but they said, ‘Let’s do a mic
test.’ So they put me in front of a microphone. At the time I had a much
more British accent than I now have, as I’ve lived in North America for a
long time. They said, ‘That’s fine. We’ll give you a job.’
“So I started to work here part time. I read the news, I had a weekly
programme with a lovely fellow called Franta Fröhlich, where we just chatted about local happenings and I introduced a few concerts. But interestingly Dubček was still in power at the time and there was still virtually no censorship for quite a long time. The news broadcasts were, as far as I remember, very truthful, there was no propaganda. I think there was still a lot of optimism, despite the fact that the Soviets had rolled in the tanks. I think people were still very rebellious and not accepting at all the idea of going back to the old regime. So for a long time broadcasting was absolutely unfettered.”
I believe it was really in the spring of 1969 that the screw began to
tighten and many people were sacked. Do you remember that time as well?
“I do. It became rather grim and got to a point where people started to mistrust each other a bit. You weren’t quite sure who you could confide in…”

And you must have been under pressure to read things that you didn’t
believe in.
“I was, and I have to admit I had to stop doing that. I had to start refusing to read some of the news items. My parents were back in England and somewhat masochistically listening to me every night….”
They must have been a little worried….
“They were very worried. My mother in particular was worried that I was going to be spirited away by the Russians and never seen again, which was probably a possibility, but at my age and naïve as I was, it didn’t really cross my mind that that could happen. But it did get to a point where I really couldn’t work here any more. Eventually in fact I was summoned by the police to have what you could describe as an interrogation – although it was not really. They didn’t threaten me with anything, but they actually said I shouldn’t have been working at the radio all that time because I came in on a student visa and I wasn’t technically allowed to work. So they basically said that I couldn’t work at the radio any more. In a way I was relieved that I couldn’t because it was getting to a point where I couldn’t broadcast much of what was put in front of me.”
We are now sitting in a studio in the new radio building, which is just behind the old building where you were working. This is all very hi-tech and modern. It must have been quite different in the late ‘60s.

Translate to your Language